Efficacy of inhaled methoxyflurane for procedural analgesia in paediatric burns: a pilot study

Background: Methoxyflurane (MF), a volatile anaesthetic agent is known for its analgesic properties in sub anaesthetic concentrations. It has been used as an analgesic agent for short procedures in both adults and children in the prehospital setting and in the emergency department. We conducted a pilot study to investigate the use of MF for burn dressing changes in children.

Methods: A prospective case series was conducted in the paediatric burns ward amongst children aged 4–9 years. During burns dressing changes MF was administered using a hand-held patient-controlled device. An investigator monitored vital signs together with pain scores, sedation levels and levels of satisfaction of staff.

Conclusion: In our setting the use of MF for inpatient burn wound dressing changes may be insufficient as a sole agent in the paediatric patient. We suggest it may be used as an adjunct to current practice. Further, larger studies are required to delineate the appropriate role MF can play in the paediatric burns setting.

M A Wellbeloved, University of the Witwatersrand

Department of Anaesthesiology, University of the Witwatersrand, South Africa

R Parkhurst, University of the Witwatersrand

Department of Paediatric Surgery, University of the Witwatersrand, South Africa 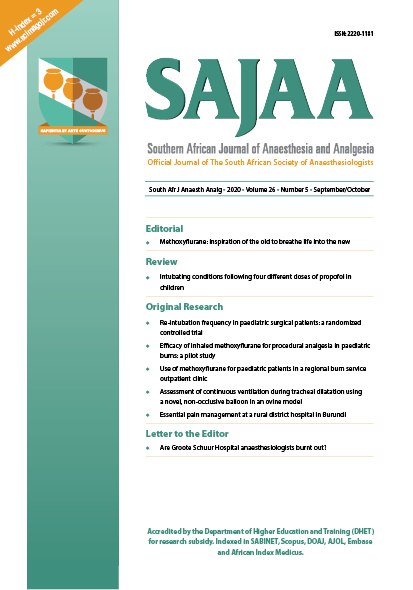 By submitting manuscripts to SAJAA, authors of original articles are assigning copyright to the SA Society of Anaesthesiologists. Authors may use their own work after publication without written permission, provided they acknowledge the original source. Individuals and academic institutions may freely copy and distribute articles published in SAJAA for educational and research purposes without obtaining permission.

The work is licensed under a Creative Commons Attribution-Non-Commercial Works 4.0 South Africa License. The SAJAA does not hold itself responsible for statements made by the authors.